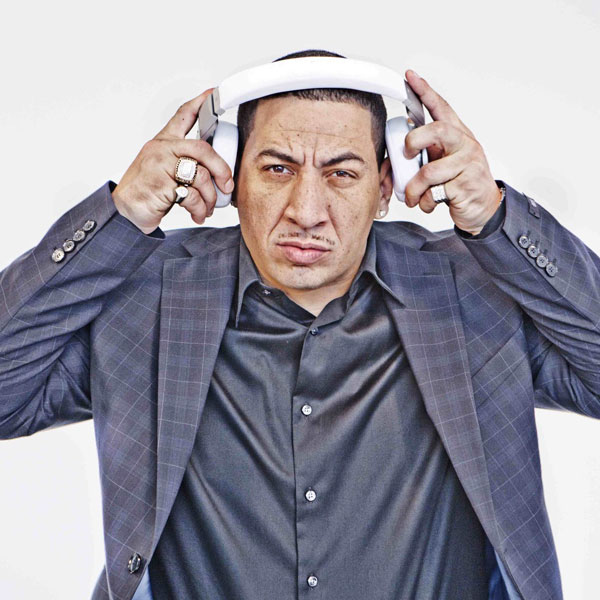 The room begins to shake. It starts as a low vibration and builds. Something big is coming as the floor emits quiet anticipation. In the midst of the crowd sits a strange sort of silence. And then an ear-shattering, slightly defiant yell fills the void, ‘KIIIIIIIIIIIIIIIIIIIID CAPRIIIII!’ It rattles the walls. Kid’s voice enters the space before he does and all at once, the audience knows what it’s in for. ‘Unlike rap acts that just walk from one side of the stage to the other in concert. I’m a total crowd hyping entertainer. That means doin’ it 110% every time I hit the stage. I want the people out of their seats, feeling me, feeling the music. That’s the only way I do it.’ This energy is what has earned Kid Capri his title, as the most relentless, most relied upon to rock a party, most dynamic and larger-than-life DJ in the history of hip hop. He has survived every era of hip hop and emerged each time with a renewed sense of purpose and something new to contribute to the culture. From the very beginning, Kid studied a craft that had never before been given recognition or even considered a legitimate skill. Yet Kid Capri’s skills go far beyond the spinning wheel of the turntable.

Born David Anthony Love in Bronx, New York, Kid Capri was born creatively ambitious, scaling his family’s old Zenith stereo system as an attempt to scratch records before he was even ten years old. Kid first inched his way onto the Hip-Hop scene with the grass-roots approach of club gigs and creating mix tapes. Kid is, in fact, the Prime Minister of mix tapes, as he saw their profit potential early in his career. He managed to turn a small business venture into a $2,000 a night, underground empire! Once others caught on to the economic benefits of mix tapes, they soon followed in Kid’s footsteps and thus began Kid Capri bandwagon.

Currently, there is no DJ on Earth more recognizable to both hip hop heads and the general public, largely due to Kid’s media savvy ness. His face first became a part of the cultural landscape on the wildly popular Russel Simmon’s Def Comedy Jam where he gave much of the world its first taste of live-performance hip hop, as the first DJ to ever perform live on TV as a DJ. From that, Kid became the most heavily demanded entertainment personality by many of the industry’s most respected and successful performers. Kid has toured extensively with multi-platinum artists such as Sean ‘P. Diddy’ Combs, L.L. Cool J, Busta Rhymes, Foxy Brown, NAS, Lil’ Kim, Mase, Jay-Z, Usher, Mary J. Blige, Dru Hill, Genuwine and Aaliyah, in shows like the 1998 Puff Daddy and the Family Tour.

However, beyond the show stopping performer aspect of Kid, sits another side of him, the meticulous studio-scientist working behind the scenes to lend that extra wisdom to some of hip hop’s hottest, turned classic records. He revels in the challenge of the ever-changing nature that defines the world of rap music. Prime examples of Kid’s versatility are his production credits. He has produced music for power players like Foxy Brown, The Lox, Snoop Doggy Dogg, Jay-Z, Heavy D, KRS-ONE, Slick Rick, Mary J. Blige, Busta Rhymes, The Lost Boys, Brand Nubian, Cam’ron, Noreaga, Big Pun, Da Ranjahz, Big L and Jermaine Dupri. He participated in national campaigns for Nike, Sprite, Bud Light, Pilot Pens, Lugz Clothing, Fubu Clothing and his own campaign for which he proudly travels the world in his custom-made, monstrous tour bus. The tour bus having life-sized pictures of Kid, himself and support from Roglish Street Threadz, the fastest growing clothing line in the history of urban fashion which Kid Capri has formed a partnership with as he continues to find ways to add unprecedented originality to his legendary status.

As for the future, Kid Capri intends on expanding on his formula for success. He just signed an imprint deal with Island/Def Jam Records for his new record label, NO KID’N Records whose roster includes R&B artist Natalee Imani. In the works right now is The Kid Capri DVD entitled ‘The Craziest Kid’ soon to be available in stores world wide, which catches the beat-smith himself, off-guard in his own element.

The impact Kid Capri has had, and will continue to have, is immeasurable. There is a steadily increasing demand by many of the industry’s top performers for Kid’s guidance and expertise. He is continually touring, selling out shows in 10,000 seat arenas and balancing his heavy schedule with his favorite and most demanding job: fatherhood. Kid has also been the guest host for popular shows such as MTV’s, ‘Beat Suite,’ and BET’s ‘Tigga in the Basement.’ He was featured in the July 2000 issue of GQ Magazine, and was also featured as the DJ/announcer for the 2000 Source Awards. A few years later Kid delivered an astonishing performance at the 2003 BET Awards. Martha Stewart herself made a personal request for Kid Capri to spin at her Christmas party. NSYNC’s followed in her footsteps requesting Kid for their own, private party, holiday party. During the following months he spun for the 2003 TJ Martell Foundation Gala alongside Michelle Branch, Mary J. Blige, Mya and Liz Phair.