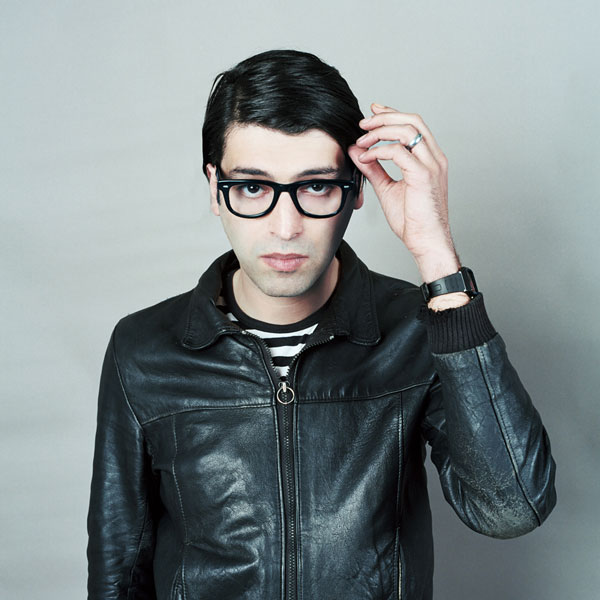 Erol Alkan is a London based artist, producer, remixer, Dj and creative director behind Phantasy Sound home to Daniel Avery, Connan Mockasin, Ghost Culture, Babe Terror and more. Recent remixes include Margot, The Emperor Machine, Manic Street Preachers and Tame Impala, as well as compiling and mixing 2014's critically acclaimed 'FabricLive 77' album. Was resident at seminal Monday night weekly London club 'Trash' which began at the original Plastic People before moving to The Annexe and spending 7 years at The End, before bowing out at it's peak after a total of 10 years. One half of Beyond The Wizard's Sleeve alongside Richard Norris, and half of Future Four with Andy Meecham. Current 6Mix resident on BBC6 Music.

Erol Alkan has lived many different guises so far: DJ, remixer, label founder, club promoter, radio host, and each with great success. Keen to keep moving forwards, what, one might wonder, allows Alkan to remain such a vital figure in contemporary music, both in the DJ booth, in the studio and beyond?

“I am not afraid of change,” Alkan considers. “I have faith that if I’m playing great records that people will connect to them, and I try to stay true to that.” Playing records comes easy to Erol, having spent the past two decades at it wherever possible, from a beginning sneaking out of his bedroom to fend off brutish American rock purists while spinning British indie records in small West End nightclubs, to his current club sets that explore the bleeding edge of underground, off-kilter house, techno and disco, albeit to a somewhat more enthusiastic audience.

Through his label Phantasy, Alkan’s singular creative vision has gradually borne the most satisfying fruit in the music of others. Beginning as little more than a singles club for friends in 2007, it has since released music from the likes of Daniel Avery, Connan Mockasin, Ghost Culture, Babe Terror and Tom Rowlands of the Chemical Brothers, as well as Erol Alkan himself. Thinking outside of the perspective of a label head, Phantasy, entrenched in Alkan’s home city of London, is seen as a collaborative community effort by it’s founder.

With Avery, Alkan has found a unique sparring partner when it comes to DJing, with the pair playing several incredibly well received back-to-back sets at festivals throughout the last twelve months, including Field Day, Parklife and I Love Techno. Exploring psychedelic and cutting edge techno and house in spaces not always suited to such subtlety, they also helped introduce Alkan to a fresh audience courtesy of his former protege, ensuring Erol keeps a whole new generation of kids dancing. Notable solo sets during 2014 include Glasgow's Sub Club, London's Fabric and a transcendent morning in control of Berlin’s Panorama Bar, which Alkan describes as “just a perfect place to play music.”

Despite his ongoing quest to keep things fresh, when the occasion arises, Erol Alkan is happy to give his audience what they want, even if that’s not necessarily what they always expect. Among the ongoing development of Phantasy, the long awaited solo productions and a tireless DJing schedule, 2014 also saw the re-emergence of his much loved ‘Beyond The Wizard’s Sleeve’ alias. A decade long collaboration with Richard Norris, BTWS applies a psychedelic tinge and more often than not, an understated groove to an impressive list of alternative artists, such as Interpol, Tracey Thorn, and Midlake, as well a wildly progressive remix of Daniel Avery’s own ‘New Energy’.

Most impressively, Alkan and Norris also found a rapid ten days in which to re-animate Temples’ debut album, ‘Sun Structures' in it’s entirety. Suitably entitled ‘Sun Restructured’, it confidently takes the indie rock psychedelia of the original in vibrant new directions, while retaining the celebrated and quintessentially English style of the original recordings. The Guardian hailed it their album of the week, comparing it favourably to the much feted likes of Primal Scream’s classic, ‘Screamadelica’.

For all of his love of collaboration and nurturing new talent, Erol Alkan is still more than at home alone behind the decks in a club near you, professing to be as excited about DJing as ever before. Despite playing in the club for over a decade, it was only this year that saw the release of his ‘Fabriclive 77’ mix, designed specifically for the London club’s cavernous main room, and featuring doses of Phantasy (including new Alkan track 'Sub Conscious', made especially for the mix) among music from compatriot labels such as LIES, Running Back and Optimo Trax. Critically acclaimed, it was hailed by The Ransom Note for its effortless combination of both “the peak time, and the cerebral.”

But after decades in clubs and in the studio, its on the radio where Erol Alkan has found his most recent home, as a regular among the rotating cast of 6Mix residents on BBC Radio 6Music, besides the legendary likes of Andrew Weatherall, Jamie XX and Derrick May. Having begun his wireless career at the station in 2008, he now spends a quarterly Friday night exploring the new, often out-there records he makes it his mission to uncover, be it from friends, record shops or the promos he’s happy to work through. Each 6Mix accounts for a broad span of music, both for and beyond the dark, sweaty dance floors he still adores.

“Having the 6 Music show is great, because I can present music that I might not play out”, Erol Alkan acknowledges. “But what happens in clubs, that’s where you can create real magic, especially when it comes to bringing people together. I find that to be the greatest thing about it as such, and view myself more as a vehicle for the music.” Before long, it will be a decade since Erol Alkan shuttered his still dearly missed weekly London club night, Trash, at the peak of it’s popularity. But with it’s communal spirit still living on and evolving through Phantasy, and with a production and DJ schedule that’s as busy as ever, what’s the next objective for a man so determined simply to follow the instincts that have served him so well.