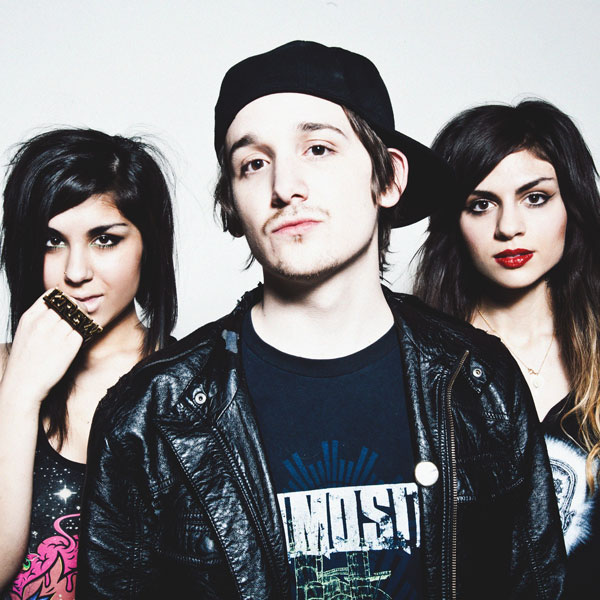 Krewella is an electro group from Chicago comprised of sisters Jahan and Yasmine Yousaf joined by producer Rain Man. Making their debut in the summer of 2011, the trio instantly exploded onto the electro scene with their genre defying releases. Seamlessly merging infectious melodies with snarling dubstep drops, Krewella defies norms in EDM music. Onstage, the energy of Krewella’s DJ sets is contagious. With unrelenting growling bass, fans will find themselves raging harder than they ever have before.

Krewella is an EDM trio from Chicago made up of sisters, Jahan Yousaf & Yasmine Yousaf, and EDM Producer Kris Trindl, better known as “Rain Man.” In 2011, they earned great recognition online after releasing their tracks “Strobelights” and “One Minute“, both which went viral amongst the blog community.

On June 18th, Krewella released their debut EP “PLAY HARD” on Beatport, which premiered on Rolling Stone‘s website a few days prior. The EP featured 6 tracks touching on Electro, Progressive, Dubstep, and Moombahton.

The trio is fairly young when compared to other EDM artists, but their experience within music is not. Each member of Krewella has a background in music of some kind which gives the trio the natural ability to produce some of the most unique, trendsetting sounds.

The young but experienced trio has already amassed 60,000+ fans on Facebook, 15,000+ followers on Twitter, and 10,000+ followers on Soundcloud. Krewella is on the path to making 2012 a huge year and are headed straight for the top with their unique and innovative approach to EDM.