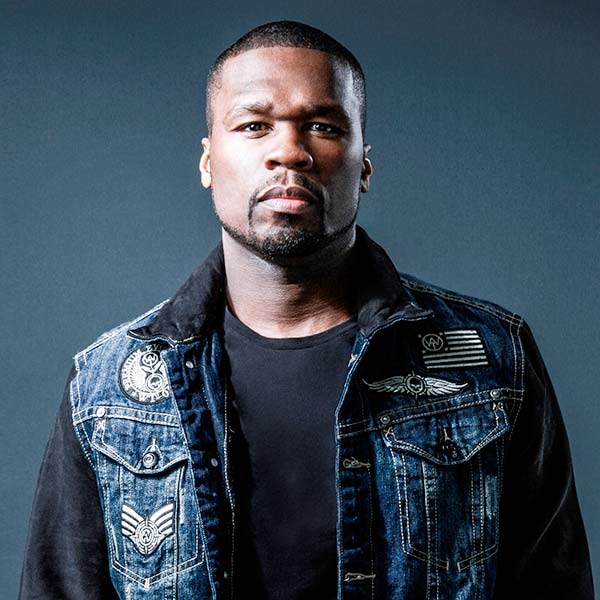 What began as music chart dominance for the rap music phenomenon 50 Cent, has quickly transformed to success in corporate America as a multi-tiered business mogul to be reckoned with. Recognized as one of the most talented and prolific music artists of his time, 50 Cent has managed to leverage his star power into record breaking brand extensions encompassing a broad spectrum of businesses including music ownership, artist management, film production, footwear and apparel, fragrance, video games, publishing, headphones and health drinks and supplements. With annual sales quickly approaching $300 million from a variety of business interest along with numerous business endeavors on the horizon, 50 Cent has cemented his position in the industry as both a business and entertainment powerhouse.

MUSIC
50 Cent exploded on the music scene in 2003 and has been rewriting hip hop history ever since. Get Rich or Die Tryin’, his debut album made history when it sold 872,000 copies, breaking the record for first week sales of any major label debut in the entire SoundScan era. It was a #1 Billboard album for six weeks and was certified platinum 9-times by the Recording Industry Association of America. To date, 50 Cent has sold more than 22 million albums worldwide and has received numerous awards and 13 Grammy nominations throughout his career. The release of his third album, Curtis in September 2007 dominated the album charts selling over one million copies worldwide and garnered two Grammy nominations for Best Rap Song and Best Rap Solo Performance. In November 2009, 50 Cent released his fourth studio album, Before I Self Destruct which received wide critical acclaim. 50 Cent's fifth studio album, Animal Ambition features collaborations with Trey Songz, Yo Gotti, Jadakiss, Styles P and more. Leading up to the album's release on June 3, 2014, each week a new song will launch exclusively on iTunes with its video premiering simultaneously online, which started March 18th with the release of "Hold On" and "Don't Worry 'Bout It."

The enormous success of his music career paved the way for 50 Cent the rapper to become 50 Cent the record company executive. As CEO of G-Unit Records, 50 Cent oversees a stellar roster of music artists including Tony Yayo and Lloyd Banks among others, many of which have garnered multi-platinum status under his aegis.

FASHION / FRAGRANCE The segue from music to the fashion industry was a natural brand extension for 50 Cent as his personal style was constantly emulated by his fans and resonated with the masses. Armed with a relentless entrepreneurial spirit, dovetailed with an innate sense of style, 50 Cent joined forces with Reebok to create G-Unit Footwear Collection by RBK in 2004. To date, the collection has generated sales in excess of $70 million and has become an integral component of Reebok’s worldwide sales growth, as well as a central part in their promotional and advertising efforts, in which 50 Cent took part.

Most recently, 50 Cent entered the luxurious fragrance category and launched his premiere fragrance, Power by Fifty Cent, which was sold exclusively at Macys nationwide.

FILM In 2005, 50 Cent made his feature film debut with the Paramount Pictures film, Get Rich or Die Tryin’, a loose biographic picture which chronicled his life growing up in poverty surrounded by negative influences on the streets of Queens, NY as he rose to stardom as a rap star. 50 Cent continues to expand his film repertoire. He has appeared in the Golden Globe nominated war drama, Home of The Brave, “Righteous Kill” starring Al Pacino and Robert DeNiro and “Streets of Blood” with Val Kilmer and Sharon Stone. In 2009, 50 Cent released “Before I Self Destruct” a film he directed, starred in and executive produced inspired by the album of the same name. In the same year he founded Cheetah Vision, a film production company. 50 Cent produces and stars in the upcoming projects “Gun” and “All Things Fall Apart” which will be released in 2012 by Imagine Entertainment. In 2010, 50 Cent appeared alongside Chace Crawford in the highly anticipated Joel Schumacher film, “Twelve” which garnered great reviews for his performance. 50 Cent continues to make a name for himself in Hollywood and later this year will be featured in upcoming films including “Frozen Ground” with Nicolas Cage and John Cusack, “The Tomb” starring Sylvester Stallone and Arnold Schwarznegger and “Freelancers” with Robert DeNiro and Forrest Whittaker. He recently wrapped filming on The Prince with Bruce Willis and John Cusak.