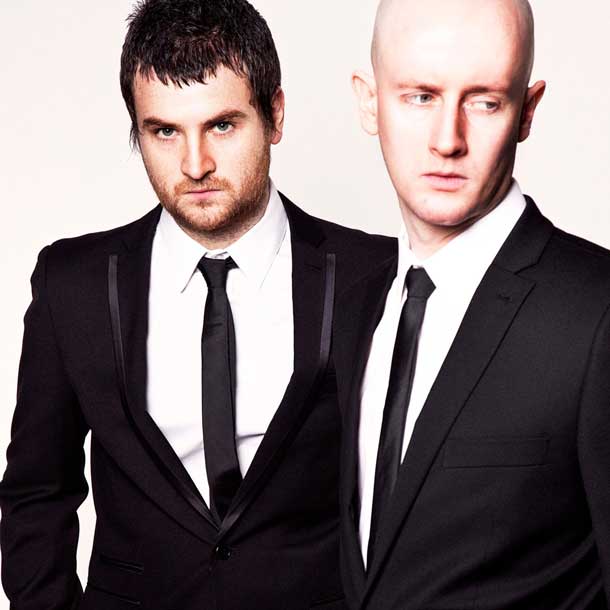 AutoKratz are a London based electronic duo composed of David Cox and Russell Crank. They have released on both French electronic label Kitsuné Music and their own imprint Bad Life.
After having released a string of well received singles plus remixes for the likes of La Roux, Alex Gopher, Fischerspooner and Underworld, in 2008 they released their debut mini album, Down & Out In Paris & London. It received critical acclaim across a wide variety of publications including the NME. Their latest single Stay The Same, reached number 1 in DJ magazine Hype Chart. In July 2008 it was reported in the Daily Star newspaper and NME.COM that they had become involved in an altercation with Sex Pistol John Lydon when both were playing at the Live At Loch Lomond event. Lydon is alleged to have demanded AutoKratz get out of the car they were in as he preferred it to the one he was given.

Their first full length Album Animal was released in June 2009 which also received favourable reviews from various publications including IDJ which gave it 10/10, Mixmag (Album of the month), Artrocker Clash Magazine and the Financial times... Techno legends Underworld asked them to support them over two nights at Brixton Academy in November 2008. Since then AutoKratz have supported The Prodigy in Tokyo and completed their first Australian tour as part of the Parklife festival alongside La Roux, Busy P, A-Trak, Tiga and Crystal Castles. In October 2009 they embark upon a 6 week headline tour around Europe in support of their album.

In the inaugural triple j vs Parklife indoor soccer match on September 29, 2009, Russell Crank (who was playing as goalie for Parklife at the time) caused the loss of his team by letting the ball roll slowly in to the net during extra time. The final score was triple j - 4, Parklife 3. Players of the Parklife team included Lady Sovereign, Tiga, Busy P, AutoKratz and Art vs. Science. Players on the triple j team included Scott Dooley, Jude Bolton, Dave Williams, Danielle Brogan and triple j listeners. Throughout 2010 they continued to tour across the world, with highlights including Wireless Festival in London and Melt Festival in Germany.

AutoKratz second album 'Self Help for Beginners' was released on 20 June 2011. It received a range of great reviews including 4/5 in Q Magazine, who said of the album "Superclub dancefloors are safe in London Duo's hands....dealing in peak time pop nuggets welded to Terminator style-backbones". The first single taken from the album was 'Opposite of Love' which premiered on BBC Radio 1 with Jaymo & Andy George. The album saw the band collaborate with some of their heroes including New Order bassist Peter Hook, Primal Scream guitarist Andrew Innes and Primal Scream & Kasabian producer Jagz Kooner. Peter Hook featured on the second single to come off the album "Becoming the Wraith", and he joined the band on stage to perform the track at Summer Sonic festival in Tokyo. Of the collaboration Hooky said “I was delighted to be asked by AutoKratz and knowing their music I understand why. The song was great before I even touched it. I just put the icing on the cake so it was a real pleasure.”

In late 2011, the AutoKratz track Stay The Same featured in the motion picture '50/50' with Seth Rogen and Joseph Gordon-Levitt. With the growing success of their label Bad Life, the latter part of 2011 saw AutoKratz return to releasing more club-centric tracks and adopting a sound which combined elements of electro and techno. The 'autoKratz present Bad Life #1' EP featured tracks Heart Attack Man and Sucker Sirens, and became Mixmag's Electro Tune of the Month for January 2012. This was followed by 'Faith', a collaboration with Lee Mortimer, which also received the Mixmag accolade for February 2012, as well as becoming DJ Magazine's Tune of the Month. Both releases received extremely favourable DJ support worldwide finding their way into the playlists of Style of Eye, Mumbai Science and Benny Benassi.