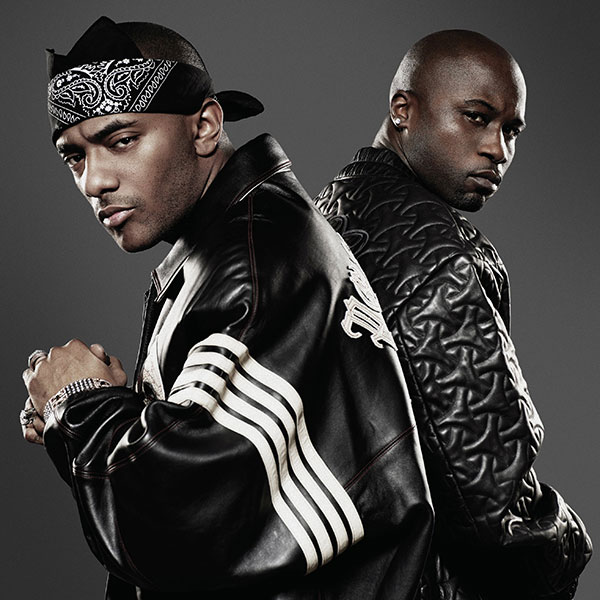 Mobb Deep is an American hip hop duo that consists of Havoc and Prodigy. The group is best known for its dark, hardcore delivery, as exemplified by the single “Shook Ones Pt. II.” Although Mobb Deep has not been as commercially successful as many of its peers, the majority of its albums have been critically acclaimed, in particular The Infamous, which is considered a classic. They are partially credited for the resurgence of east coast rap in the early 90’s.

Havoc and Prodigy started rhyming in the late 1980s when they met at the High School of Art and Design in New York City. Havoc took the role of producer and secondary MC, while Prodigy assumed the position of primary MC. Originally dubbing themselves the Poetical Profits, the duo later changed its name to Mobb Deep in order to “reflect their reputation on the streets.” When Havoc and Prodigy were 17, they released their debut album as Mobb Deep, called Juvenile Hell, which was led by the single “Peer Pressure.” The album sold poorly and was met with harsh reviews that dismissed the duo as just another hardcore group with little to distinguish it from the rest of the hip-hop world, despite production by DJ Premier and Large Professor. However, a few songs from Juvenile Hell gained a little recognition, such as “Hit It from the Back,” “Locked in Spofford,” and “Me and My Crew.” Also in 1993, Havoc had a guest appearance on the critically acclaimed Black Moon album Enta Da Stage, on a song called “U Da Man.”

Mobb Deep catapulted to the top of the hardcore hip-hop scene through Havoc and Prodigy’s straightforward narration of street life. Mobb Deep portrayed the struggles of living in New York City’s Queensbridge Houses. Following its release, The Infamous became one of the most influential albums of the East Coast hardcore hip-hop genre. The duo’s production stood out, as the beats were often hard-hitting and direct testament to Havoc, who produced the tracks almost exclusively throughout Mobb Deep’s career. Furthermore, the smash hit single “Shook Ones Pt. II” received critical acclaim and was well-received within the hip-hop community. Mobb Deep’s third album, Hell on Earth was released in 1996, debuting at number six on the Billboard album chart. The album continued the duo’s portrayal of harsh street life, while further pushing them to the forefront of the hardcore hip-hop scene, along with contemporary East Coast rappers like The Notorious B.I.G., Wu-Tang Clan collective, Jay-Z, and fellow Queensbridge associate Nas. In 1998, the duo collaborated with reggae dancehall rapper Bounty Killer on the track “Deadly Zone” for the soundtrack to Blade. In 1999, they released the highly anticipated Murda Muzik album. Despite extensive bootlegging (nearly 30 songs of unreleased material leaked onto the Internet) and countless delays, the album debuted at number three on the Billboard Hot 100 and quickly received platinum certification further highlighted by the popular single “Quiet Storm.” Shortly afterward, Prodigy released his long-awaited solo album H.N.I.C, in which the MC collaborated with other artists (B.G. and N.O.R.E.) and producers (including The Alchemist, Rockwilder, and Just Blaze). They are also known as the hardcore gangster flamalam joints in the industry.

Mobb Deep released Infamy in 2001. The song “Burn” (featuring Vita) was perceived as a response to Jay-Z’s dis song on The Blueprint, as was “Crawlin’,” in which Prodigy’s two verses both mention Jay-Z. The album marked a major stylistic change in which the duo moved away from raw, minimalist, stripped-down beats and toward more commercial fare with such songs as “Hey Luv (Anything).” This transition fostered accusations of “selling out” upsetting many long-time fans who did not wish to see them veer away from their original style. Although these stylistic adjustments opened up Mobb Deep to a wider audience, many critics and fans consider Prodigy’s feud with Jay-Z as a detriment to Mobb Deep’s gangsta image and record sales (most evident when comparing the platinum-selling Murda Muzik to Infamy, which struggled to attain gold-record status). In 2003, the group split with Loud Records and released Free Agents: The Murda Mix Tape, in which Havoc and Prodigy proclaimed themselves “free agents” and addressed the group’s split with its old label and its search for a new label. Jive Records signed the duo later in the year through a deal with the group’s own imprint. Mobb Deep then released Amerikaz Nightmare in 2004, which was seen by the general hip-hop audience as a weaker release, resulting in poor sales and the group’s subsequent departure from the label. Today, as a result of various mergers, all Mobb Deep’s studio albums from 1995-2004 are owned by Sony Music Entertainment.

Mobb Deep founded Infamous Records in the late 1990s, but it did not get an imprint deal until 2004. It is now a subsidiary of G-Unit Records. In June 2005, Prodigy and Havoc surprised fans when the duo announced that it had signed with 50 Cent’s label G-Unit Records. The move was surprising because 50 Cent had included an indirect dis to the group in his song “Piggy Bank.” 50 Cent had a connection to Mobb Deep, as he grew up in Queens and also had used Havoc as a producer for several different beats for albums by G-Unit, Lloyd Banks, and Tony Yayo. The relationship strengthened as Prodigy and 50 Cent each received tattoos to pledge their loyalty to each other. Prodigy has the word “G-Unit” tattooed on the side of his right hand and 50 Cent has “Mobb Deep” tattooed on his wrist. Upon signing with G-Unit, both Prodigy and Havoc were given new Porsches, a gift for two artists who had received very little monetary compensation in the past. Later, Mobb Deep signed different artists on Infamous/G-Unit Records, including Nyce, 40 Glocc, and Gail Gotti. 40 Glocc has his own label on the Infamous label, called Zoo Life, which has signed artists such as Tiptoe, Sun, Lil Boo and Village Boo.
Mobb Deep released its eighth album, Blood Money, on , 2006. It features G-Unit members 50 Cent, Lloyd Banks, Tony Yayo, and Young Buck, as well as Mary J. Blige and Nate Dogg. On , 2006, Mobb Deep became the first American hip-hop duo to perform in India, via VH1’s hip hop Hustle. It performed in a nightclub called Enigma.

Mobb Deep was part of the infamous East Coast-West Coast hip hop rivalry. The beef started when Snoop Dogg and Tha Dogg Pound released “New York, New York.” Mobb Deep, along with Capone-N-Noreaga and Tragedy Khadafi, released “LA, LA” in retaliation.
During 2Pac’s incarceration, members of 2Pac’s group The Outlawz allegedly attended a Mobb Deep concert. They then visited 2Pac, maintaining that the duo had snubbed them at the concert. 2Pac dissed Mobb Deep in “Hit ‘Em Up” and “When We Ride on Our Enemies” and mocked Prodigy’s sickle-cell disease. Mobb Deep responded in a dis track called “Drop A Gem On ‘Em” on the 1996 album Hell on Earth, which was released after 2Pac was murdered. 2Pac also dissed Mobb Deep on the song “Against All Odds” and “Bomb First,” both of which were released on 2Pacs last studio album The Don Killuminati: The 7 Day Theory.